Adult acquired flatfoot deformity (AAFD or AAF) is a progressive, symptomatic deformity resulting from gradual stretch of the posterior tibial tendon as well as other ligaments supporting the arch of the foot. AAFD develops after skeletal maturity, May also be referred to as posterior tibial tendon dysfunction (PTTD), although due to the complexity of the disorder AAFD is more appropriate. Significant ligamentous rupture occurs as the deformity progresses. Involved ligaments include the spring ligament, the superficial deltoid ligament, the plantar fascia, and the long and short plantar ligaments. Unilateral AAFD is more common than bilateral AAFD. 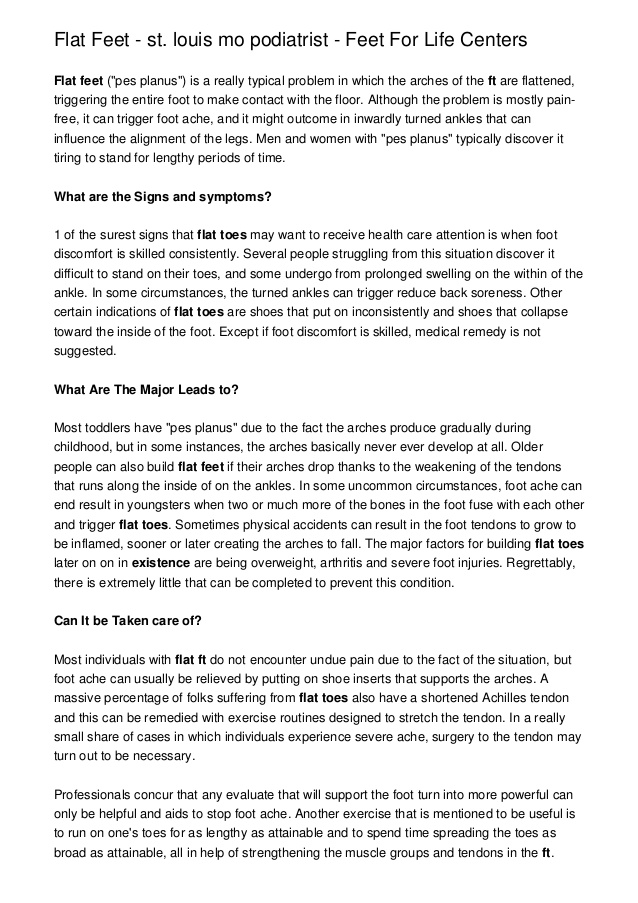 Posterior tibial tendon dysfunction is the most common cause of acquired adult flatfoot. Sometimes this can be a result of specific trauma, but usually the tendon becomes injured from wear and tear over time. This is more prevalent in individuals with an inherited flat foot but excessive weight, age, and level of activity are also contributing factors.

Some symptoms of adult acquired flat foot are pain along the inside of the foot and ankle, pain that increases with activity, and difficulty walking for long periods of time. You may experience difficulty standing, pain on the outside of the ankle, and bony bumps on the top of the foot and inside the foot. You may also have numbness and tingling of the feet and toes (may result from large bone spurs putting pressure on nerves), swelling, a large bump on the sole of the foot and/or an ulcer (in diabetic patients). Diabetic patients should wear a properly fitting diabetic shoe wear to prevent these complications from happening.

First, both feet should be examined with the patient standing and the entire lower extremity visible. The foot should be inspected from above as well as from behind the patient, as valgus angulation of the hindfoot is best appreciated when the foot is viewed from behind. Johnson described the so-called more-toes sign: with more advanced deformity and abduction of the forefoot, more of the lateral toes become visible when the foot is viewed from behind. The single-limb heel-rise test is an excellent determinant of the function of the posterior tibial tendon. The patient is asked to attempt to rise onto the ball of one foot while the other foot is suspended off the floor. Under normal circumstances, the posterior tibial muscle, which inverts and stabilizes the hindfoot, is activated as the patient begins to rise onto the forefoot. The gastrocnemius-soleus muscle group then elevates the calcaneus, and the heel-rise is accomplished. With dysfunction of the posterior tibial tendon, however, inversion of the heel is weak, and either the heel remains in valgus or the patient is unable to rise onto the forefoot. If the patient can do a single-limb heel-rise, the limb may be stressed further by asking the patient to perform this maneuver repetitively.

Flatfoot can be treated with a variety of methods, including modified shoes, orthotic devices, a brace or cast, anti-inflammatory medications or limited steroid injections, rest, ice, and physical therapy. In severe cases, surgery may be necessary.

Many operations are available for the treatment of dysfunction of the posterior tibial tendon after a thorough program of non-operative treatment has failed. The type of operation that is selected is determined by the age, weight, and level of activity of the patient as well as the extent of the deformity. The clinical stages outlined previously are a useful guide to operative care (Table I). In general, the clinician should perform the least invasive procedure that will decrease pain and improve function. One should consider the effects of each procedure, particularly those of arthrodesis, on the function of the rest of the foot and ankle.
« What Exactly Is Adult Aquired Flat Foot… Achilles Tendonitis Painfulness Treatme… »
Profile

Login to quote this blog

You cannot quote because this article is private.